How to Emotionally Accept the Unacceptable 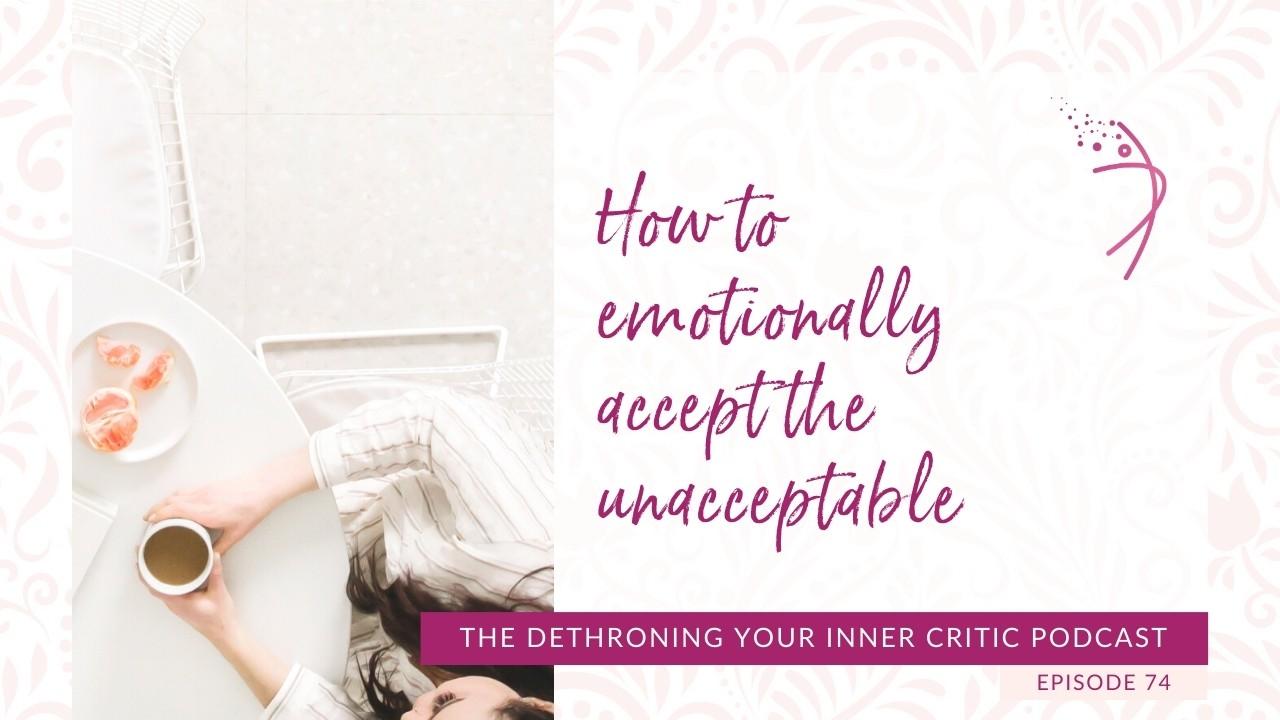 Hey Dethroners!  Today I am talking about how to get your emotions in check when you are dealing with something that is unacceptable to you.

I have been working with people for over 25 years so that’s a whole lotta people I have worked with! Thousands at this point so I have a lot of insight about why humans suffer.

At the heart of why we suffer really boils down to our attachments and demands to the way your life is supposed to be. This is what I call your Inner Critic’s addictions. So in the thousands of people I have worked with, whether it’s a private client, a corporate group, or someone in my Mastering Your Mind course, when they first begin to tap into what their Inner Critic has been demanding and attached to they think their addiction is one thing, but come to realize it is something else entirely.

Most people are not aware of what their Inner Critic’s deeper demands are. So let me give you an example: I was working with a corporate client this week who has struggled with an eating and alcohol addiction for most of her adult life. And for years, she was focused on trying to get those things in check by focusing on how to eat healthier and stop drinking. She had momentary success, but it has been an up and down struggle for her entire life.

When she examined the voice of her Inner Critic, she made the connection that she often feels disregarded, unimportant, and that she is being disrespected. That was the REAL addiction. Her Inner Critic needed to feel valued and she was constantly blaming, judging and criticizing the people in her life for not behaving in a way that made her feel the way her Inner Critic said she needed to in order to be good enough.

She was raised by a narcissistic father and often felt disregarded and unimportant to him and was very angry at him growing up.  And this automatic conditioned way of thinking just played on a repetitive loop over and over, so that when other people would act self involved, she immediately felt disregarded, not important, and had a constant underlying anger that she felt very justified in having. And that is what was running her for her entire life.

The way she would numb herself to this perpetual anger inside is to binge eat and drink alcohol. Her huge breakthrough came when she was willing to see her conditioned Inner Critic assigning meaning to other people’s behavior and how she was forever looking towards other people to make her feel valued and important, rather than finding her own value and self worth from within her own mind.

And so many people are doing that!! They don’t realize how attached their Inner Critic is to other people. But here is the kicker: Remember that everyone on the planet has an Inner Critic, whose main job is to make sure that we don’t feel any pain. So our Inner Critic has us being very focused on ourselves.

EVERYONE is mainly only focused on themselves. We have about 50,000 thoughts a day, 80% of which are negative, and 95% of which are repetitive. So when people act however they act, it is because of THEIR Inner Critic! But our Inner Critic mind is conditioned to personalize everyone’s behavior and then attempt to control everyone so that they behave differently.

We learn this very young. Children focus a lot on themselves. They learn at a very early age about the concept of “mine”. My toys, my room, my dog, my mommy and daddy.  And that then morphs to my grades, my reputation, my status, my friends, my money. So our Inner Critic is very busy defending what it experiences as “mine” or “not mine”.

And this is how conflict with people occurs. When they do or say something that encroaches on what we consider to be mine: my worth, my value, my lovableness, my importance, my enoughness.  So we see life as though there is ME and then there are OTHERS. And those OTHERS, are people that have the power to make you feel rejected, judged, criticized, not important, or not good enough.

We get upset when we know we are right but people don’t listen to us.  We get frustrated when someone inconveniences us or interrupts us. We get furious when someone is thoughtless.  We get resentful when we are trying to tell someone something that is important to us, but they don’t seem interested.  We get rageful when someone else has lied or has let us down in some way. And we get super paranoid when someone doesn’t act friendly towards us.

For your whole life, you have been trying to handle these situations by focusing on getting the outside world to fit your picture.  And this is what has prevented you from feeling at peace, grateful and fulfilled in your life. Because when you focus on what other people should or shouldn’t do, it is a setup for being inwardly disturbed most of the time.  But when you understand that EVERYONE is behaving the way they are because of the automatic thoughts in their minds, you can begin to see that we are all really the same.

You can actually begin to identify with other people, even when they do something that in the past would have really made you angry or triggered.  You stop seeing yourself as so separate from everyone else. You realize that they are trying to protect themselves from pain, which is exactly what your Inner Critic is trying to do.

And when you begin to see others through that shift in perspective, you stop getting so triggered and reactive to other people. You can actually begin to see that you are just like them. You can begin to experience everything that everyone does and says as though you have done it or said it.  Because chances are, that you have!

If that were you, what would your Inner Critic be saying to you that made you say that or act that way? You can remind yourself that your anger, irritability, resentfulness, fear, jealousy or anxiety is from YOUR thought. It’s not from their behavior. Remember, everything starts with a thought. And chances are you are on autopilot when it comes to your thoughts.

Most people have thoughts...but they don’t think. Actual thinking requires that we learn how to have mastery over our thoughts.

Most people aren’t aware of the real underlying thoughts and feelings that account for what they say and do. So the name of the game is to use your mind to emotionally accept what your Inner Critic has convinced you is unacceptable. Accept the unacceptable by clearly seeing the drama your Inner Critic whips up.

The drama is usually our Inner Critic assigning some meaning or interpretation for why other people are saying or doing something. And the funny thing is that we often have different automatic interpretations for ourselves than we do for other people.

The actions are the same, but your Inner Critic will interpret the situation very differently. If you can remember that people act the way they do because of their automatic Inner Critic thoughts, you might find that you are less triggered by other people’s behavior. You might have more compassion and understanding and even be able to have a better relationship with some of the most difficult people in your life.

Because whenever you feel irritated or angry, you are really cutting yourself off to someone else who is probably behaving the same way you have behaved a thousand times before. But you have felt justified in the behavior when you do it. The thing is, we are all waaay more alike than different. We all operate from an automatic mind, we all assign faulty interpretations to other people’s behavior and we all struggle with the same self doubt, insecurity, the need to be loved, valued, accepted and good enough.

When you see that you have just been overpowered by your Inner Critic for most of your life, you come face to face with how much lost happiness, lost peace, lost compassion, lost wisdom and lost love your Inner Critic has cost you. And you were previously blind to this. When you see the difference between you and your Inner Critic, you start to have more unconditional love and compassion for other people, and for yourself. You stop thinking that there is something wrong with you.

You realize that you are not so different from everyone else on the planet.  You have more understanding for the automatic conditioned behavior we ALL fall victim to and have much more clarity when your Inner Critic is distorting your thoughts.

And when you can do this over and over day in and day out, you are rewiring a new mind, one thought at a time.  You are practicing emotionally accepting the unacceptable, and working that muscle every day. And this is how you change your life.  Your happiness and peace are right there waiting inside you, and become more and more available to you when you continue to dethrone your Inner Critic.

In order to truly change your life, you need to be willing to think differently from how you feel.

That's why I collected some of my favorite resources and trainings to create an owner's manual for your mind. Want access? Tell us where to send your log-in details!

I’m an unconventional  psychotherapist who probably sounds different from what you’re used to hearing . I offer one-on-one therapy and life coaching programs that give you a practical methodology for understanding why you think and act in ways that keep you from living the life you want.

5 Ways to Combat Stress and Burnout in Your Career
podcast
May 26, 2020
Mind the Gap
podcast
May 19, 2020
THIS is the Reason You're Feeling Stuck in Your Life
anxiety mind method self confidence self esteem
May 17, 2020
Close 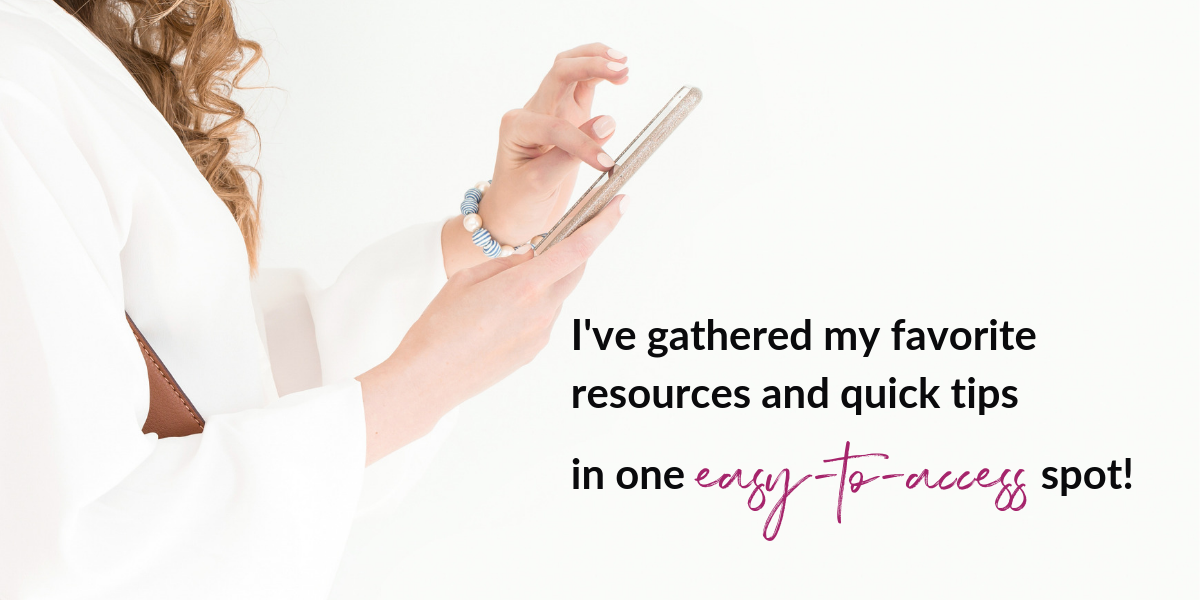 In my exclusive resource vault, you'll find the tools you need to understand where your Inner Critic is holding you back...and what to do about it!